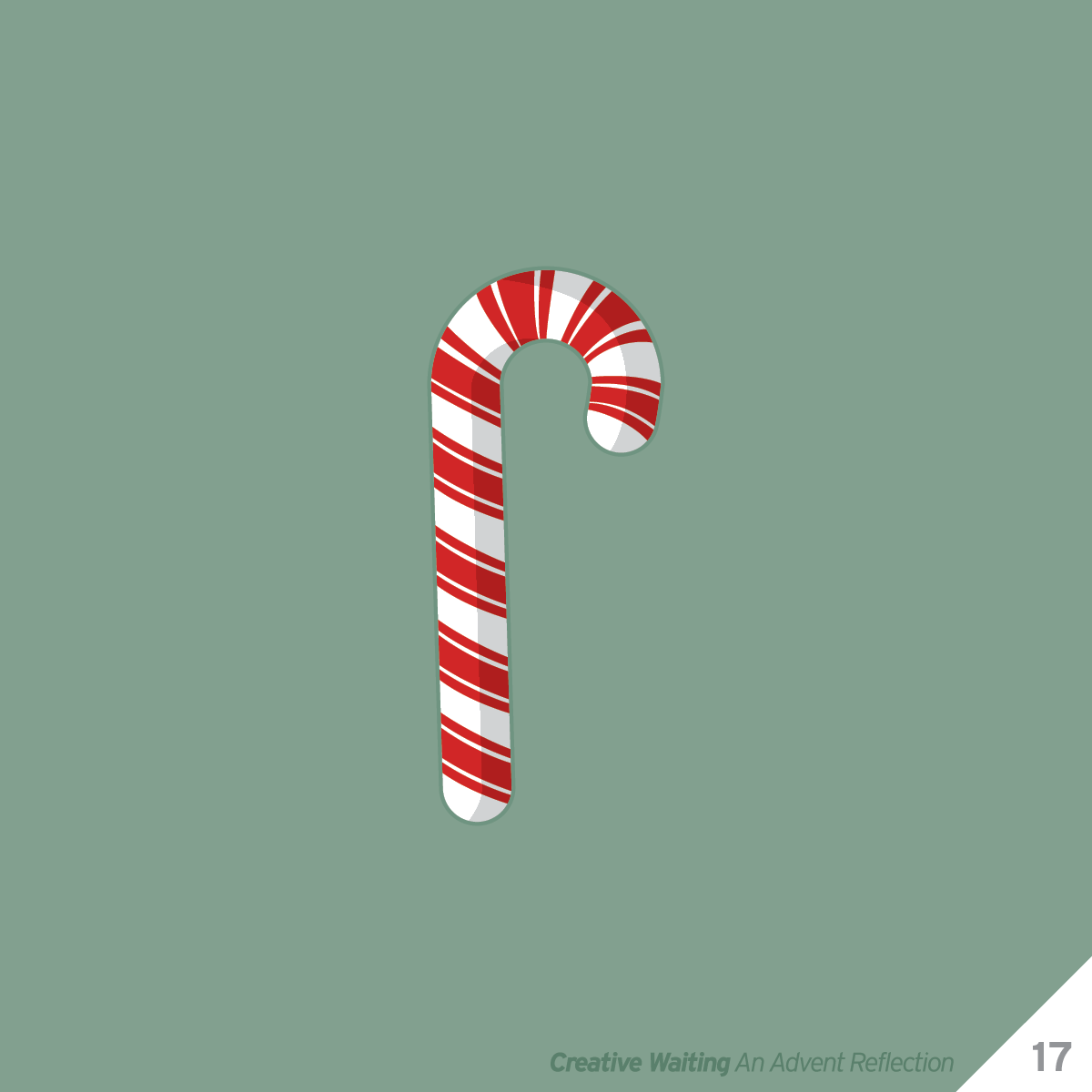 The idea is that the candy cane represents Jesus's stripes, or the wounds that he endured for us. But, as a child, I did not like this ornament from the Advent calendar. I remember thinking that this was a terrible connection to make, that it ruined the sweetness of the candy. But now, I've come to appreciate it. It's another visual prompt of God's sacrifice. Much like the snow is now a reminder of his grace.

I also remember thinking, "Why are we reading this at Christmas? Isn't that more appropriate for Easter?" Yes, and no. It's that context thing, again.

The sweetness of this season in the birth of a baby is manifest in the ugliness of that very baby's death thirty some years later as a man. The joy of the holiday is a reality because of what happens next. The fullness of this Christmas story is not just this night in Bethlehem. The fullness of this story begins and ends in eternity. It includes Jesus birth, life, death and resurrection.

The passage below from Isaiah 53 is read often in Christmas liturgy. It foretells of this Savior who is to come and bear the weight of the world to rescue us. But the Message translation below is rich. I think it makes the reality tangible. The NIV translations make it feel poetic and removed. This translation is gritty and brings to life the sacrifice that this baby comes to bear.

So, I realize I might have ruined the candy cane for you. But I hope it will become a reminder of how incredible this Christmas day is—a Savior is born, not just a baby.

Here are the readings for the seventeenth day of Advent:

Who believes what we’ve heard and seen?
Who would have thought God’s saving power would look like this?
The servant grew up before God—a scrawny seedling,
a scrubby plant in a parched field.
There was nothing attractive about him,
nothing to cause us to take a second look.
He was looked down on and passed over,
a man who suffered, who knew pain firsthand.
One look at him and people turned away.
We looked down on him, thought he was scum.
But the fact is, it was our pains he carried—
our disfigurements, all the things wrong with us.
We thought he brought it on himself,
that God was punishing him for his own failures.
But it was our sins that did that to him,
that ripped and tore and crushed him—our sins!
He took the punishment, and that made us whole.
Through his bruises we get healed.
We’re all like sheep who’ve wandered off and gotten lost.
We’ve all done our own thing, gone our own way.
And God has piled all our sins, everything we’ve done wrong,
on him, on him.
He was beaten, he was tortured,
but he didn’t say a word.
Like a lamb taken to be slaughtered
and like a sheep being sheared,
he took it all in silence.
Justice miscarried, and he was led off—
and did anyone really know what was happening?
He died without a thought for his own welfare,
beaten bloody for the sins of my people.
They buried him with the wicked,
threw him in a grave with a rich man,
Even though he’d never hurt a soul
or said one word that wasn’t true.
Still, it’s what God had in mind all along,
to crush him with pain.
The plan was that he give himself as an offering for sin
so that he’d see life come from it—life, life, and more life.
And God’s plan will deeply prosper through him.
Out of that terrible travail of soul,
he’ll see that it’s worth it and be glad he did it.
Through what he experienced, my righteous one, my servant,
will make many “righteous ones,”
as he himself carries the burden of their sins.
Therefore I’ll reward him extravagantly—
the best of everything, the highest honors—
Because he looked death in the face and didn’t flinch,
because he embraced the company of the lowest.
He took on his own shoulders the sin of the many,
he took up the cause of all the black sheep.

"That’s what Christ did definitively: suffered because of others’ sins, the Righteous One for the unrighteous ones. He went through it all—was put to death and then made alive—to bring us to God."