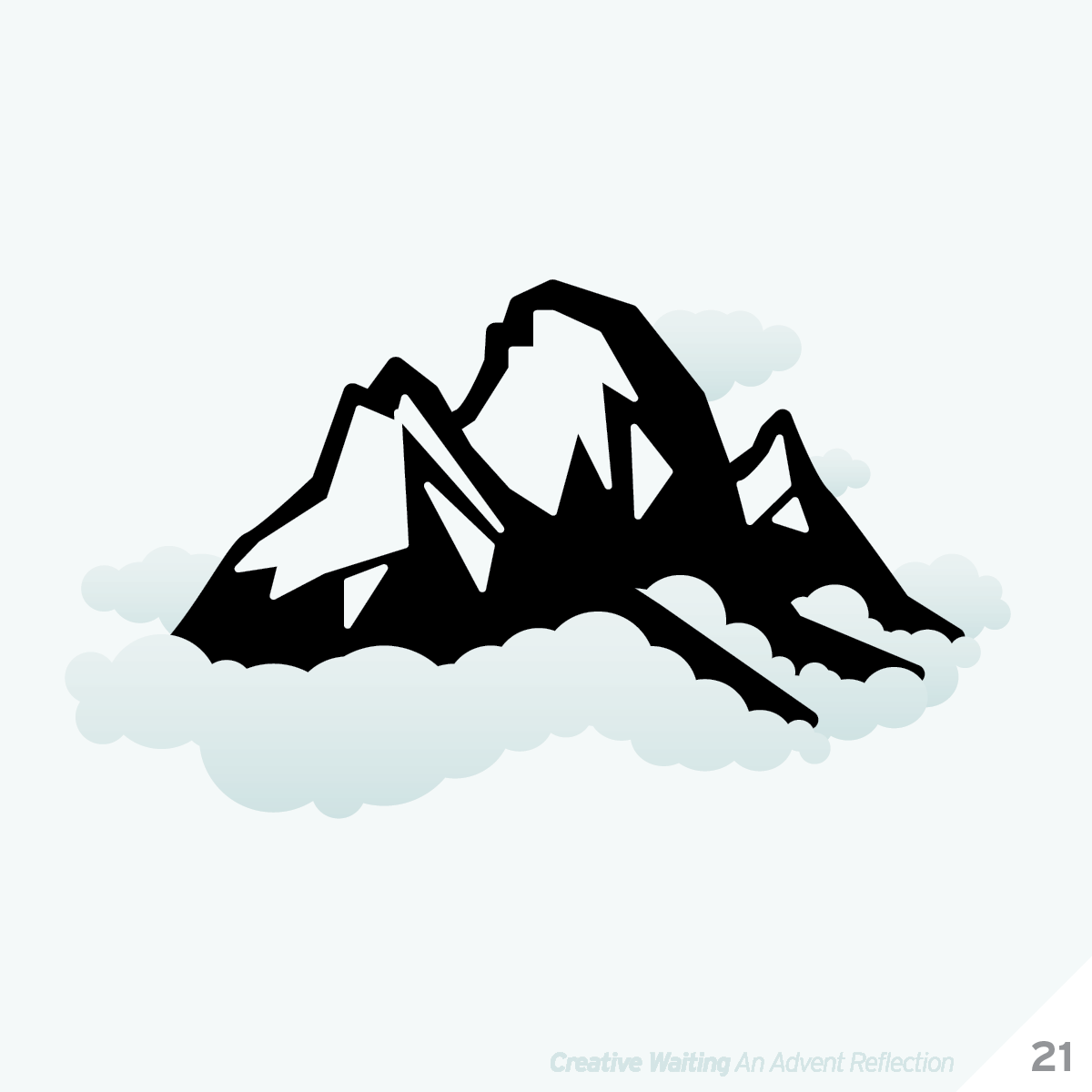 The reading below is a bit longer than normal, but if you would, sit with it and read it. It's good, promise. It's from Isaiah, a big book in the middle of the Old Testament. It's a conversation between God and Isaiah, a prophet, about Israel.

It dispells this notion of a vindictive God. It fly's in the face of our assumptions and fears that God is keeping a tally. It couldn't be farther from the truth. We begin to see the inklings of what will be revealed in Jesus many, many years later—a God who loves us and pursues us. It's a message of hope and comfort.

And even more, the closing ten lines or so speak to the dependability of this God. Not only is he pursuing us, but he never tires in his pursuit.

I'm clinging to that promise.

Here is the reading for the twenty-first day of Advent:

“Comfort, oh comfort my people,”
says your God.
“Speak softly and tenderly to Jerusalem,
but also make it very clear
That she has served her sentence,
that her sin is taken care of—forgiven!
She’s been punished enough and more than enough,
and now it’s over and done with.”
Thunder in the desert!
“Prepare for God’s arrival!
Make the road straight and smooth,
a highway fit for our God.
Fill in the valleys,
level off the hills,
Smooth out the ruts,
clear out the rocks.
Then God’s bright glory will shine
and everyone will see it.
Yes. Just as God has said.”
A voice says, “Shout!”
I said, “What shall I shout?”
“These people are nothing but grass,
their love fragile as wildflowers.
The grass withers, the wildflowers fade,
if God so much as puffs on them.
Aren’t these people just so much grass?
True, the grass withers and the wildflowers fade,
but our God’s Word stands firm and forever.”
Climb a high mountain, Zion.
You’re the preacher of good news.
Raise your voice. Make it good and loud, Jerusalem.
You’re the preacher of good news.
Speak loud and clear. Don’t be timid!
Tell the cities of Judah,
“Look! Your God!”
Look at him! God, the Master, comes in power,
ready to go into action.
He is going to pay back his enemies
and reward those who have loved him.
Like a shepherd, he will care for his flock,
gathering the lambs in his arms,
Hugging them as he carries them,
leading the nursing ewes to good pasture.

The Creator of All You Can See or Imagine

Who has scooped up the ocean
in his two hands,
or measured the sky between his thumb and little finger,
Who has put all the earth’s dirt in one of his baskets,
weighed each mountain and hill?
Who could ever have told God what to do
or taught him his business?
What expert would he have gone to for advice,
what school would he attend to learn justice?
What god do you suppose might have taught him what he knows,
showed him how things work?
Why, the nations are but a drop in a bucket,
a mere smudge on a window.
Watch him sweep up the islands
like so much dust off the floor!
There aren’t enough trees in Lebanon
nor enough animals in those vast forests
to furnish adequate fuel and offerings for his worship.
All the nations add up to simply nothing before him—
less than nothing is more like it. A minus.
So who even comes close to being like God?
To whom or what can you compare him?
Some no-god idol? Ridiculous!
It’s made in a workshop, cast in bronze,
Given a thin veneer of gold,
and draped with silver filigree.
Or, perhaps someone will select a fine wood—
olive wood, say—that won’t rot,
Then hire a woodcarver to make a no-god,
giving special care to its base so it won’t tip over!
Have you not been paying attention?
Have you not been listening?
Haven’t you heard these stories all your life?
Don’t you understand the foundation of all things?
God sits high above the round ball of earth.
The people look like mere ants.
He stretches out the skies like a canvas—
yes, like a tent canvas to live under.
He ignores what all the princes say and do.
The rulers of the earth count for nothing.
Princes and rulers don’t amount to much.
Like seeds barely rooted, just sprouted,
They shrivel when God blows on them.
Like flecks of chaff, they’re gone with the wind.
“So—who is like me?
Who holds a candle to me?” says The Holy.
Look at the night skies:
Who do you think made all this?
Who marches this army of stars out each night,
counts them off, calls each by name
—so magnificent! so powerful!—
and never overlooks a single one?
Why would you ever complain, O Jacob,
or, whine, Israel, saying,
“God has lost track of me.
He doesn’t care what happens to me”?
Don’t you know anything? Haven’t you been listening?
God doesn’t come and go. God lasts.
He’s Creator of all you can see or imagine.
He doesn’t get tired out, doesn’t pause to catch his breath.
And he knows everything, inside and out.
He energizes those who get tired,
gives fresh strength to dropouts.
For even young people tire and drop out,
young folk in their prime stumble and fall.
But those who wait upon God get fresh strength.
They spread their wings and soar like eagles,
They run and don’t get tired,
they walk and don’t lag behind.