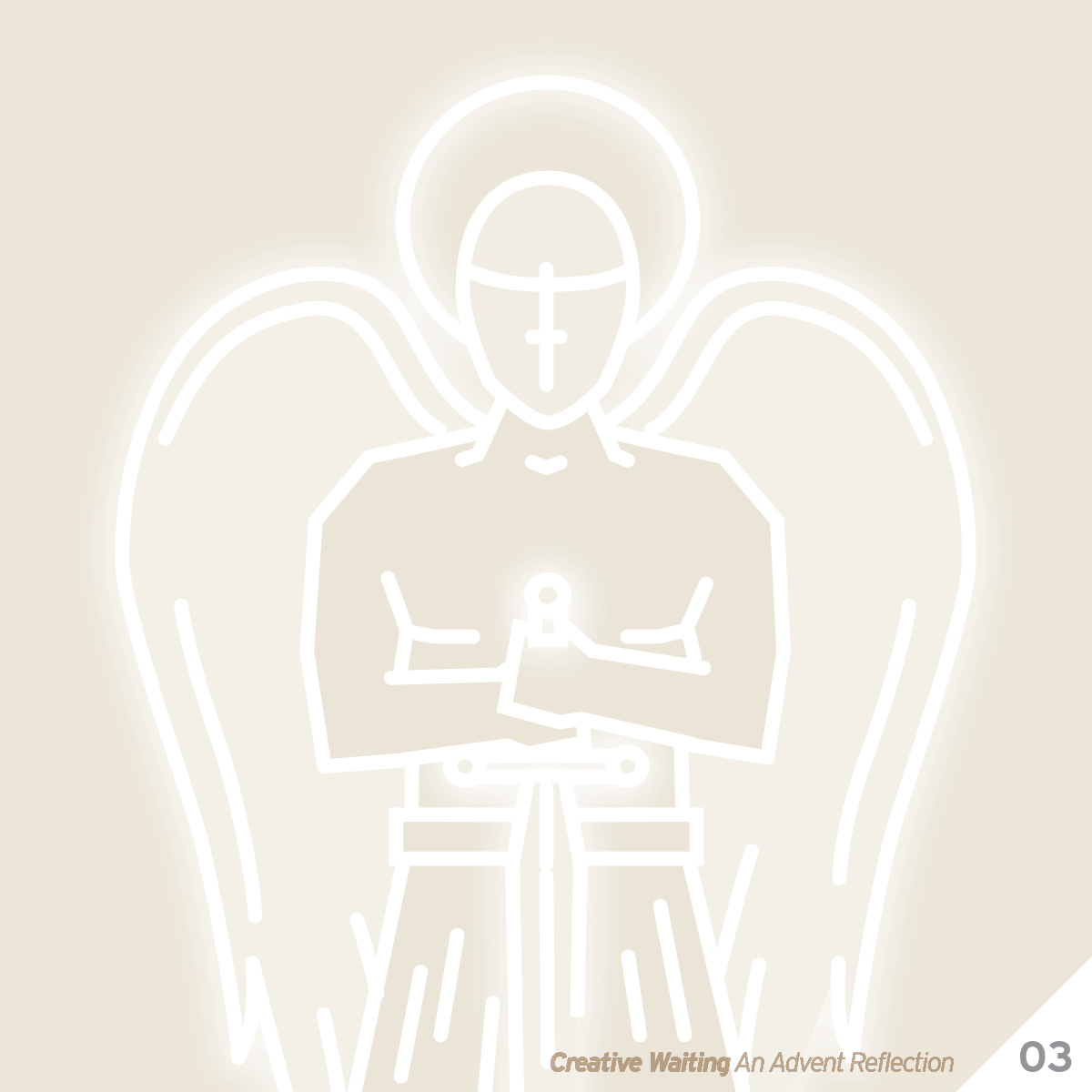 I don't think we have a grasp on what and who angels are. In all of these accounts below, an angel shows up and says "Do not be afraid."

I don't think we're talking little babies with wings. Or even angelic feminine figures. We're talking beings that shake us, our perceptions, our realities.

Words like strong and mighty and powerful and incredible don't even come close. Terrifyingly wonderful, because the sight of them is probably fear inducing. And it's not just the visual, it's the reality that there really are powers and principalities that we know not. Our world is shaken when an angel shows up. And what's more, the news they bring—glad tidings of great joy—for everyone!

These accounts below are rich. Here's some context. The Old Testament tells the story of Israel, a nation loved by God. He pursues them, protects them, fights for them, loves them and more. Yet at every turn they ultimately want nothing of it. And so the story goes dark for some couple hundred years. No God stories. God goes silent...until now where we pick up the story. Angels—God's messengers.

Here are the readings for the third day of Advent:

Luke 1:5-25
During the rule of Herod, King of Judea, there was a priest assigned service in the regiment of Abijah. His name was Zachariah. His wife was descended from the daughters of Aaron. Her name was Elizabeth. Together they lived honorably before God, careful in keeping to the ways of the commandments and enjoying a clear conscience before God. But they were childless because Elizabeth could never conceive, and now they were quite old.

It so happened that as Zachariah was carrying out his priestly duties before God, working the shift assigned to his regiment, it came his one turn in life to enter the sanctuary of God and burn incense. The congregation was gathered and praying outside the Temple at the hour of the incense offering. Unannounced, an angel of God appeared just to the right of the altar of incense. Zachariah was paralyzed in fear.

But the angel reassured him, “Don’t fear, Zachariah. Your prayer has been heard. Elizabeth, your wife, will bear a son by you. You are to name him John. You’re going to leap like a gazelle for joy, and not only you—many will delight in his birth. He’ll achieve great stature with God.

“He’ll drink neither wine nor beer. He’ll be filled with the Holy Spirit from the moment he leaves his mother’s womb. He will turn many sons and daughters of Israel back to their God. He will herald God’s arrival in the style and strength of Elijah, soften the hearts of parents to children, and kindle devout understanding among hardened skeptics—he’ll get the people ready for God.”

Zachariah said to the angel, “Do you expect me to believe this? I’m an old man and my wife is an old woman.”

But the angel said, “I am Gabriel, the sentinel of God, sent especially to bring you this glad news. But because you won’t believe me, you’ll be unable to say a word until the day of your son’s birth. Every word I’ve spoken to you will come true on time—God’s time.”

Meanwhile, the congregation waiting for Zachariah was getting restless, wondering what was keeping him so long in the sanctuary. When he came out and couldn’t speak, they knew he had seen a vision. He continued speechless and had to use sign language with the people.

When the course of his priestly assignment was completed, he went back home. It wasn’t long before his wife, Elizabeth, conceived. She went off by herself for five months, relishing her pregnancy. “So, this is how God acts to remedy my unfortunate condition!” she said.

Matthew 1:18-25
While he was trying to figure a way out, he had a dream. God’s angel spoke in the dream:
“Joseph, son of David, don’t hesitate to get married. Mary’s pregnancy is Spirit-conceived. God’s Holy Spirit has made her pregnant. She will bring a son to birth, and when she does, you, Joseph, will name him Jesus—‘God saves’—because he will save his people from their sins.” This would bring the prophet’s embryonic sermon to full term:

Watch for this—a virgin will get pregnant and bear a son;
They will name him Immanuel (Hebrew for “God is with us”).

Then Joseph woke up. He did exactly what God’s angel commanded in the dream: He married Mary. But he did not consummate the marriage until she had the baby. He named the baby Jesus."

** Luke 1:26-38**
In the sixth month of Elizabeth’s pregnancy, God sent the angel Gabriel to the Galilean village of Nazareth to a virgin engaged to be married to a man descended from David. His name was Joseph, and the virgin’s name, Mary. Upon entering, Gabriel greeted her:

Good morning!
You’re beautiful with God’s beauty,
Beautiful inside and out!
God be with you.

She was thoroughly shaken, wondering what was behind a greeting like that. But the angel assured her, “Mary, you have nothing to fear. God has a surprise for you: You will become pregnant and give birth to a son and call his name Jesus.

He will be great,
be called ‘Son of the Highest.’
The Lord God will give him
the throne of his father David;
He will rule Jacob’s house forever—
no end, ever, to his kingdom.”

Mary said to the angel, “But how? I’ve never slept with a man.” The angel answered,

"The Holy Spirit will come upon you,
the power of the Highest hover over you;
Therefore, the child you bring to birth
will be called Holy, Son of God."

“And did you know that your cousin Elizabeth conceived a son, old as she is? Everyone called her barren, and here she is six months pregnant! Nothing, you see, is impossible with God.”And Mary said,

Yes, I see it all now:
I’m the Lord’s maid, ready to serve.
Let it be with me
just as you say.
Then the angel left her."

Luke 2:8-14
There were sheepherders camping in the neighborhood. They had set night watches over their sheep. Suddenly, God’s angel stood among them and God’s glory blazed around them. They were terrified. The angel said, “Don’t be afraid. I’m here to announce a great and joyful event that is meant for everybody, worldwide: A Savior has just been born in David’s town, a Savior who is Messiah and Master. This is what you’re to look for: a baby wrapped in a blanket and lying in a manger.”At once the angel was joined by a huge angelic choir singing God’s praises:

"Glory to God in the heavenly heights,
Peace to all men and women on earth who please him."

If you want this series in your inbox, subscribe here and we'll make sure it's there first thing in the morning starting tomorrow! We'll send you content periodically and of course you can unsubscribe at any time.

Creative Waiting is a reflection on the season of Advent through design. It is released daily December 1st through the 25th. For more on the why behind the series, start here. To begin at the beginning start with Day 1. All verses are quoted from The Message.